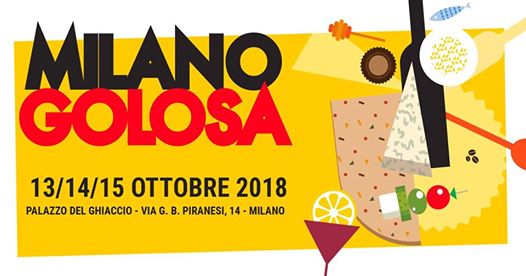 Birra del Borgo is proud to be one of the Milano Golosa’s partner. The gastronomic event dedicated to specialty-foods and drinks and held at Palazzo del Ghiaccio in Milan from October 13th to October 15th.

We would point out that we’ll headline two interesting show-cooking events:

Back in the 50s, in the midst of an economic boom, there was an increasing interest and consumsumption of beer. However, the spread of beer shall take place by a low-alcohol liquor license. Pizza restaurants weren’t allowed actually to serve beverages with an alcohol content higher than 8%, which were basically wines. So, beer replaced soft drinks and began to be considered as equivalent to water. Pizzerias became social gathering places for the middle-class family’s lunch in the ‘60s and eating was no longer limited to upper-classes. This was the right way for the birth of perfect beer and pizza matching. A popular and democratic pairing because of pizza and beer come from the same raw materials: water, grain and yeasts. We put forward this combination in a more innovative and modern way here in Milan, but without forgetting its simple and popular roots. We start with a seemingly straight forward pairing of LISA, pizza and mortadella, then we gradually build complexity up mixing aromas, seasons, territories, styles, sourdough and fermentation techniques.

LISA is our lager brewed with Senatore Cappelli ancient wheat and orange peels. It is an example of how innovation could be at service of a traditional beer style, just as Birra del Borgo does since 2005.

There are only kibbled wheat and barley in the dough. With Italian spit-roasted pork, gilmonte cheese fondue and chicory.

Maledetta experiments a blend of traditional and indigenous yeasts for creating a specific autochthonous strain. It is dedicated to Modigliani cigar and Maledetto Toscano cigar club.

Mixed leavening dough with thyme ricotta, porcini mushroom salad and an anchovies and white truffle emulsion. Keto Reporter is a classic porter to which Kentucky Toscano tobacco leaves are added, that are used for the renowned italian cigars production. A black, dark and impenetrable beer comes as a result, with a roasty, tobacco, spicy and nutty scent composite.

October 15th, 2018 at 02:00 pm. With the participation of BdB’s Sales Director Alfredo Colangelo.

What is tradition? Tradition is innovation become popular. Think about popcorn, mayonnaise, the Roman traditional Supplì (rice croquette) and all the meals become famous thanks to new manufactoring techniques and new consumption patterns. The Roman popular cuisine has found its ideal triangular and crunchy container with Trapizzino, in which tradition and innovation perfectly merge. Similarly the newborn from Birra del Borgo LISA tries to modernise a traditional beer style such as Lager, giving uniqueness, flair and sophistication to it.

Trapizzino is a new idea of pizza with different shape and new way to be served and eaten, while Lisa is a new idea of italian beer through the world, that truly moved people for simplicity.

We just thought it was self-evident pairing them. You can also taste ReAle, next to newborn Lisa. The first beer brewed at Borgorose and one of the most beloved, by which revisiting Birra del Borgo’s story started in 2005 and comprehending our path’s evolution. ReAle is inspired by tradional Indian Pale Ale and it has intense hoppy composite thanks to american strain used.

A full-bodied amber beer with bright reflexes and with handsome spicy and citrus flavours and aromas.

LISA BY BIRRA DEL BORGO AND TRAPIZZINO WITH CHICKEN CACCIATORE

REALE BY BIRRA DEL BORGO AND TRAPIZZINO WITH OXTAIL RAGOUT