Everybody crazy for the “Bizarres” 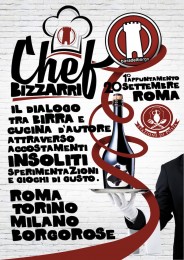 One beer for month, for twelve months. Birra del Borgo’s Bizarre beers melt together original tastes and flavors, varying from oysters to fruits, amphora to spices, hops to barrels, keywords being creativity and experimentation! This peculiar “chain” has turned into our “Bizarre Chefs” project that wants to explain a new idea of beer, free from the clichés and closer to gourmet food. Five appointments on national territory will involve chefs and caterers willing to put themselves out there imagining and experimenting unusual blends between beer and quality food. First appointment will be Tuesday, September 20, at “Stazione Posta” restaurant, in Testaccio neighborhood in Rome, where host chef Luigi Nastri will share his cooking skills and his stove with Davide Del Duca from “Fernanda Osteria”, contemporary bistro in Porta Portese, and Walter Musco from renowned Bompiani, Roman bakery in Piazza Bompiani.

On stage, participants will be entertained by stories of Leonardo Di Vincenzo, Birra del Borgo founder, alongside with chefs, friends, journalists and fans. Six dishes will search for the best combination with four Birra del Borgo beers, three “Bizarre” and a seasonal one: “Rubus”, beer made of raspberries, “Etrusca”, inspired by fermented ancient beverages, “Equilibrista”, produced with 40% of wine must, and “Stelle e Strisce”, tribute to the American flag with its mix of American hops. After Rome, BIZARRE CHEFS will get to Turin in October, hosted by Andrea Gherra and Pietro Vergano’s “Banco Vini e Alimenti”. October will also witness Rome’s second step, at “Tordomatto” with Adriano Baldassarre, while November will be the turn of Milan.

The project’s closing event is scheduled for December in Spiedino’s brewery, in Borgorose, where the newborn “Bancone” will welcome all the participants in its suggestive taproom, a place for staying, buying, tasting.

Beer and food, gourmet food, what do they have in common? Come find it outon Tuesday, September 20 at Restaurant “Stazione Posta”

A night that will tell the story of the dialogue between beer and gourmet food through original blends, experimentations and tricks with taste.