Searching for the lost beer with Leo, Teo e Sam! 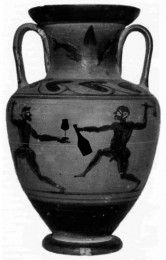 Some time ago we wrote about the oncoming arrival at the Brewery of some huge terracotta amphoras (the one you can see here is just slightly different and it’s actally an old wine amhpora coming from Capua ancient site, but it’s well giving the idea of what we are talking about, and alos of how much beverages were important during past times feasts). Now the time has come to tell you something more about our project – actually someone already did it – in which we have been joined by  Sam Calagione,  Teo Musso and a very special guest, prof. Patrick McGovern,Scientific Director of Biomolecular Archaeology Laboratory at University of Pennsylvania and an expert in fermented beverages in the past.  He already worked with DogfishHead in realizing their incredible Ancient Ales.

Some time ago Sam, Leo and dr. Pat – as we friendly named him   – were talking together about a new step of the project, and about their intention in exploring fermented beverages belongin to the mediterranean ancient civilizations. Italy was a natural option, and, fancy that!, Leonardo was just wondering about a, “amphora fermented” beer!

The three brewmasters and dr Pat get their hands dirty for the brew!

So, on the 6th March 2012 – after an unforgettable night at Open Baladin Roma – the three brew masters and dr. Pat met at the Old Brewery in Borgorose for the test batch of our brand new “early beer” insipred to the ancient fermented beverages of the Etruscan Age. We choose unusual ingredients for that – grano Saragolla (an ancient crop variety dating back to 400 d.C. in Central Italy), hazelnuts, pomegranates, honey, tree rasin, dried grapes – according to the remains that could be found in some of the major archeological sites in Italy. We went there, tracing back the old Etruscans in search for the lost recipe, as we will soon show to you in our new video.

We visited the Museo Archeologico di Cecina , not far from Pisa, where we could see  some burial vases containing hazelnuts, pomegranates, apple and grapes, coming from the near necropolis of Casa Nocera, used to give aromas to some kind of fermented beverages. Also in the ancient necripolis od Prato Rosello at Artimino, not far from the beautiful village of Carmignano with its Archeological Museum – they coudl find incence burners and honeycomb.

The last – but not least – ingredient was the yeast:  prof. Duccio Cavalieri, Researcher and Professor of Microbiology and responsible for the Computational Biology
Research and Innovation Centre – Fondazione Edmund Mach in S. Michele all’Adige , gave us a very special one: an 1.500 years old yeast coming from some ancient grapes that have been found in Tuscany, and that is still alive and kicking!

So, that’s it: we tried to recreate – with the precious help form dr Pat – our own interpretaion of what a fermented beverage of the etruscan age could have tasted like: at the moment, the result of the first batch is fermenting in the terracotta amphoras in Borgorose. Sam is going to make it’s own version ad Dogfish. We can’t wait to toast with our “historic” beer

A special thanks to those who helped us in our research: prof. Lorenzo Costantini from Museo d’Arte Orientale di Roma, dott. Andrea Zifferero expert in Etruscology and ancient civilizations,d.ssa Maria Chiara Bettini from the Museo Archeologico di Carmignano, d.ssa Annamaria Esposito who was in charge of the site of Casale Marittimo and Casa Nocera, dott. Fabrizio Burchianti, major of Casale Marittimo e scientific director at the Museo di Cecina.