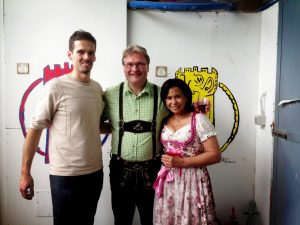 Just as it happened last year, the day after our big party was no break for us! Joined by a small but fierce group of beer lovers, we performed the second step of the “What if ReAle was born in…” project! This year’s guest was Andreas Gaenstaller, a great German brewer who came to visit us with his wife Manuela from Bamberg (you can see them in the picture together with our brewer Andrea). Those who attended the party could taste his fantastic beers and they know what we are talking about! So, here you can find some more details about ReAlt, that is What if ReAle was born in… Bamberg!

The idea, as we already explained, is the following:  in special occasion – like this one – we will brew an alternative version of our beloved ReAle, immagining how it could have been if it was born in another place in the world. We will determine ingredients or tecniques in consequence and we will “dress it up” every time in a different way, always leaving easily recognizable the original style. So, this year it was the turn of Germany!

Bamberg’s most famous beer is Rauchbier, of course, but we didn’t want to repeat ourselves with a smoked beer as we made for  Reale in Kilt. So, Andreas e Andrea, our head-brewer, imagined a beer that could be a good mix between our Reale and an Altbier, another very interesting German style. Altbiers are dark, high-fermentation beers originaly born in the Düsseldorf whose name – meaning old beer – comes from the old brewing method that is still used nowadays.

Obviously, in our case it was only a “loose interpretation” to vary the classic recipe of our  Reale.This is what Andrea says about the new beer he brewed with Adreas: “we lowered the initial plato degree of one unit to be closer to the classic Alt values, as well as for the ABV. The beer color will stay the same as Reale, but in this case the amber tone is obtained using a mix of malts with less caramel malts than the starting recipe, to get less toffee notes and a more intense malty taste.  To the nose, beside the classic citrus aromas given by the American hops that one can find in Reale, there are the typical herbal and fruity notes of German hops, like the Spalter Select. Moreover, to make the beer aroma even more complex, we added a modern gruit (as it was common to do for Altbier in the past) made by a mix of spices and leaves, among wich one can clearly detect coriander and lemon myrtle. Also for the fermentation we changed something: tough we always made it at high temperatures, we  used a German yeast  that will then be kept for a long time at a lower temperature as it happens for Lager beers, to refine and improve the final aroma of our beer”.

Can’t wait to taste the final result? We too! In the meantime, here you can see some pictures of the day!