In this case, Vespa is not the scooter, but the insect! Do you consider waps and hornets as annoying and useless creatures, whose only aim is ruining our summer barbeques? Well, this time you could change your mind. Beside being very important to the environment, just like the bees, we should also thank those insects for preserving the wine (and beer)  typicalness.

Actually, during the winter they store inside their bowels, the yeasts that can produce wine, bread and beer fermentation. This is the result of a scientific research undertaken by the Edmund Mach Fundation of San Michele all’Adige – including prof. Duccio Cavalieri, that had already been a precious source for the Etrusca project –   Florence University and the Montpellier CNRS.

Wasps and hornets “harvest” the yeast from the grape’s skin in the vineyards and they keep them inside their intestines for a certain period of their life cycle, only to “release” them onto the fruit when they’re ripe again, tasting delicious to them. Furthermore,  those two species, differently from others, are quite “residential” and seem to be strictly related to specific areas. This makes thus possibile to identify a specific microbiological diversity belongin to a specific region or vineyard.

Being a biologist himself, and deeply passionate for local yeasts,  Leonardo couldn’t keep himself from experimenting this new discovery using prof. Cavalieri’s wasp yeasts to make a peculiar beer, or we should say two! Both Birreria at Eataly Roma and Eataly New York were the “laboratories” where the first steps of “Vespa Project” took place.

This is the code name we adopted for the experimental use of the wasp yeasts in small batches, to verify how the different yeasts strains behave in fermenting different worts. Each of the two beers that have been made up to now has its own name, recipe and taste.

First beer we made was Maia, that we called so because of the lovely cartoon Maya the Bee(actually bees do are nicer than wasps!). We brewed it in the mid of Fall at Eataly Roma, when Leonardo and Brooks Carretta weere joined by Teo Musso and Sam Calagione. Maia has been made using 40% barley malt, 30% honey and 30% malvasia grape must (the same we used for our Caos).

“The result – Brooks says – is a beautiful golden beer, around 7% ABV, where the cereal, honey and wine aromas nicely melt together. The yeasts we used came from three strains that the researchers could select and extract from the wasps’s bowels. Those yeasts, that were used for the first time ever in making beer, worked very well and gave the beer a nice dry character”. 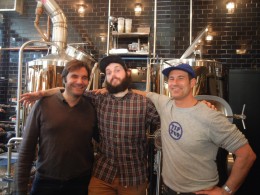 In december we flew to New York to meet Sam Calagione and Peter Hepp, the new Eataly New York’s resident brewer, to proceed with the project  (and to do much more, but we’ll tell you about that later) brewing  the second beer, that will be probably called  Calabrone (the Italian word for hornet). 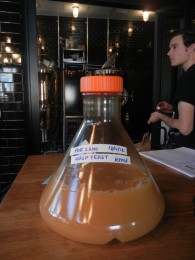 This time the starting recipe was the same of Nicoletta, one of the latest beer made at Eataly NY by Sam and Peter: they used chestnut and wildflower honey,  pinot noir must and Champagne yeasts, that in this case we replaced with the one coming from the wasps intestine.

Are you ready to taste a… stinging beer???