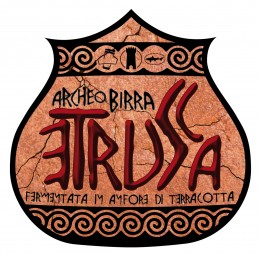 We’ve been brewing a lot of new stuff lately, so now time has come to draw some conclusions  and tell you something about what came out from our latest collaboration brews! Some of them has already been officially presented – Reale in Kilt and Etrusca – while one will be only available in UK until 11/11 – we’re talking about Tutto Fa Brodo, already a big success in the JDWetherspoon’s pubs! And we ourselves, we can’t wait to taste the final result of super-collaboration beer made during the event I Giorni dell’IPA!

So let’s start fro  the Etrusca, that was launched at Open Baladin Roma , Petit Baladin in Turin and than at the  Slow Food Salone del Gusto featuring the three Birreria Bros and their own versions of the beer.

That’s really something unique: as we used unusual ingredients (fo a beer) and most of all an unusual fermentation system (the amphoras!), the result is a real “archeological find”. The amber colour reminds the amphora-aged wines; the nose gives scents of honey and berries and quite uncommon mineral notes. When you taste it, sharpness is the main feature, and the honey notes are quickly followed by mineral ones, again.

So, the few ones who will have the chance to taste this extremely rare beer (which has been made in a very limited quantity, of course) will be able to say that he had a sip of history!

As much “extreme” as Etrusca, but in its own – more modern – way, is Reale in Kilt we made in collaboration with Brewdog right after celebrating BdB Day 2012. As we already mentioned, it’s the first step of our brand new project “What if Reale was born in… “.

How would our first beer have tasted if it was born elsewhere? Let’s try to imagine it modifying ingredients or techniques according to different countries or regions, as if the beer had originally been born there. “Dressing it up” in a different way from time to time but always respecting its core origin.

In this specific case, the project obviously started from Scotland. Some changes were made toBirra del Borgo’s full-bodied and intensely hopped Pale Ale, to give it a definite Scottish vibe.Pale Ale Marris Otter (one of the finest English varieties’ barley malt) and some peated malt(the one usually used to make Whisky) were added to the classic malts used for ReAle, together with a Scottish warm-fermentation yeast. The beer then spent meny months in a wooden vat to accentuate the roasted taste.
Richer and more alcoholic than the “standard” Reale, it will seduce you with its peated and slightly smokey nose and its velvet body.

At the end, we give you some anticipation about the beer we brewed during the Giorni dell ‘IPA event together with our Italian fellow brewers from Brewfist, Opperbacco and Toccalmatto. We cant’t tell you more – not even the name! – as it is still fermenting, but it will be something not to be missed: golden colour: inspired by a classic British IPA, using Marris Otter malts among the others, and British hops (Fuggle ed East Kent Golding) il will be a round and important body, a rich hoppy nose and an intense – yet balanced – bitterness. Just as your favourite IPA should be!