Talking about craft beer…It’s all grist to the mill! 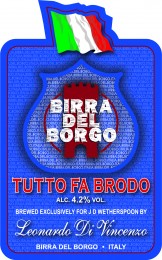 Just a few more days to “the world’s biggest Real Ale festival” held twice a year in the UK by the famous pub (and more…)  chain J. D. Wetherspoon. For this edition, beginning on the 24 October, JDW invited us to join the festival by brewing an exclusive Ale for them at Everards Brewery. Here you can read something about our brew. We chose to use unusual ingredients and a lot of creativity, just to remember ourselves that we like to dare and experiment: so, the beer name is “Tutto fa Brodo”, meaning it’s all grist to the mill!!

So, let’s start from the beginning, of course! In the middle af a very hot summer, they called us from  Wetherspoon to join their festival, asking us to brew something completely new at Everards Brewery. We had already been there two years ago when we first partecipated Fetival to the “World’s biggest Real Ale festival” held by Wheterspoon. Counting more than 800 venues in the whole United Kingdom, the company  invites every year, for both editions of the Festival, about ten breweries from all over the world asking them to brew their own interpretation of Real Ale. The beers are only packed in cask, and you can find them only in the JDW pubs, for a limitied amount of time.

Last time we made a special version of our Chestnut Ale Castagnale, but this time we wanted to bring a bunch of Italy’s hot summer days to the rainy British countryside; that’s how the recipe of “Tutto fa Brodo”  was born: it’s a deep golden Ale, quite light (4,2% ABV) yet with a round body and a very pleasant citrus bouquet given by the aromatic hops we used, but also from the unusual mix of Mediterranean and exotic ingredients: orange peel, lemon leaves, lime fruit and the aromatic Kampot Pepper from Cambodia.

That’s how we got this refreshing and appealing beer: if you’re lucky enough to be in the UK between 24 October and 11 November 2012, you’ll be able to taste it in one of the many  JDWetherspoon pubs,  and maybe you cold be so kind to send us a picture of that!

Leonardo ed Andrea went to Leicester to brew the beer at Everards, and those are their impressions: “…brewing at Everards has been very interesting as we could meet and exchange opinions and experiences with our English fellow brewers. The event organization was perfect,  and we could also meet many other brewers coming from all over the world (Australia, Canada, Lithuania, Netherlands, United States…) during the London press conference to launch the Festival. It has been a big pleasure talking with them having fun all together drinking a Real Ale… or many!”.