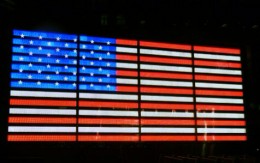 So this is how it all happened: just a couple of weeks before Christmas, while the whole brewery was in the middle of the pre-holiday panic, a brave and small group on behalf Birra del Borgo, led by Leonardo Di Vicenzo left Borgorose (well, actually it was Fiumicino Airport…) towards the United States of A, with a precise mission to accomplish: make the Big Apple’s beer consumption  rise! And, oh, yes, also to let the fantastic craft beer made in Borgorose to be (better) known and appreciated also in NY – and further.  Actually, we have to admit they are already quite successful in the North America States where they are distributed thanks to our friends from B.United… but we should go to give a look by ourselves, don’t you think so?

So, that’s how we spent a hard and vibrant week in New York, plus some out-of-town day trip, meaning several hundred miles drive in the USofA! We decided to go visit one more time (but for some of us it was actually the first ever) our friends at  Dogfish Head in Milton, Delaware. 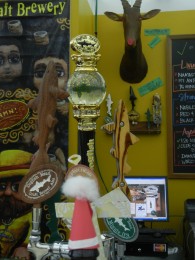 Visitin Sam Calagione’s brewery is always an emotion, and even for those who have already been here, there’s always something new! The big gap covered in 18 years, from the homely mini-plant used at the beginning – that you can still see in the brewery’s shop – to the huge fermenting vats used today and the ever-growing buildings  is impressive, but what is really stunning is the passion and pride the whole staff – and Sam himslef – share in doing what they like the best: making great beers! Among those, also the Dogfish’s version of Etrusca, which they fermented in a bronze-covered vat: here the honey and fuity notes are much more intense compared to the sour and mineral ones you can find in Birra del Borgo’s Etrusca, due to the different material used for fermentaion (in our case, terracotta amphoras). Before driving back to New York, we also made a stop at Dogfish Brewpub in Rehoboth Beach, where it all began and where still today, beside the restaurant, you can find a small plant for the experimental batches and, at the upper floor, a distillery! And this is only few meters away from the Delaware seashore.

B.United‘s offices – our importer in the USA –  are in a very quiet place among the woods in Connecticut. Matthias and Stefanie Neidhart came here more than 20 years ago from Germany,  bringing with them the native passion for good beer!  Today B.United is one of the biggest craft beer – but also sake, mead, cider and other specialities – importer in the USofA, and we owe them lot for the success of Italian craft beer in the States. In their huge warehouse, our beers are in good company! And then, there is the fascinating  Zymatore Project: a special cellar, where old wooden barrels previously used to age wine or other spirits coming from the best producers in the world, are now used to age small batches of beer, cider and mead, “to create liquids of unheard flavors and aromas that destroy the boundaries of beer, wine, mead, cider & spirits”. 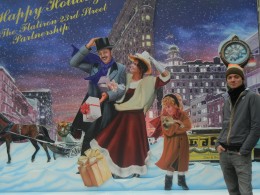 Back in New York, we let us be soak into the pre-Chistmas atmosphere… between one bar and the other! Beside the second step of the Vespa Project at Eataly NY with Sam Calagione and Peter Hepp, our trip to the Big Apple was mostly aimed to visit some of the best beer venues in town, including old favourites and nice surprises, and to personally meet who introduces our beers to newyorkers. 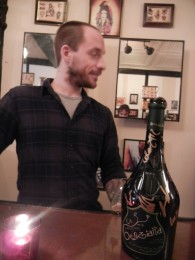 So we shared some Genziana and Rubus bottle at The Cannibal (a great restaurant-butcher serving greay craft beers and juicy meet dishes such as heart tartare!), Proletariat (a small yet well-provided beerpub din Brooklyn where you can taste great beers and admire great tattos) and Brouwereij Lane at Greenpoint. We were also very proud to find our Reale Extra e Sedicigradion the starred restaurant Gramercy Tavern‘s list ! 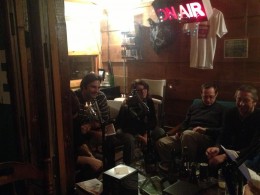 Leoardo and Luciana on air at Beer Sessions!

Finally, we also took part to a Beer Sessions episode hosted by Jimmy Carbone, beer expert and founder of Jimmy’sno43, one of New York craft beer temples! Beer Sessions is only one among the programs of Heritage Radio, an independent radio broadcasting from the small studio in the rear of Roberta’s, the best pizzeria in NY! If you want to listen to what we said about Italian craft beer – and more – here is the episode podcast: enjoy!