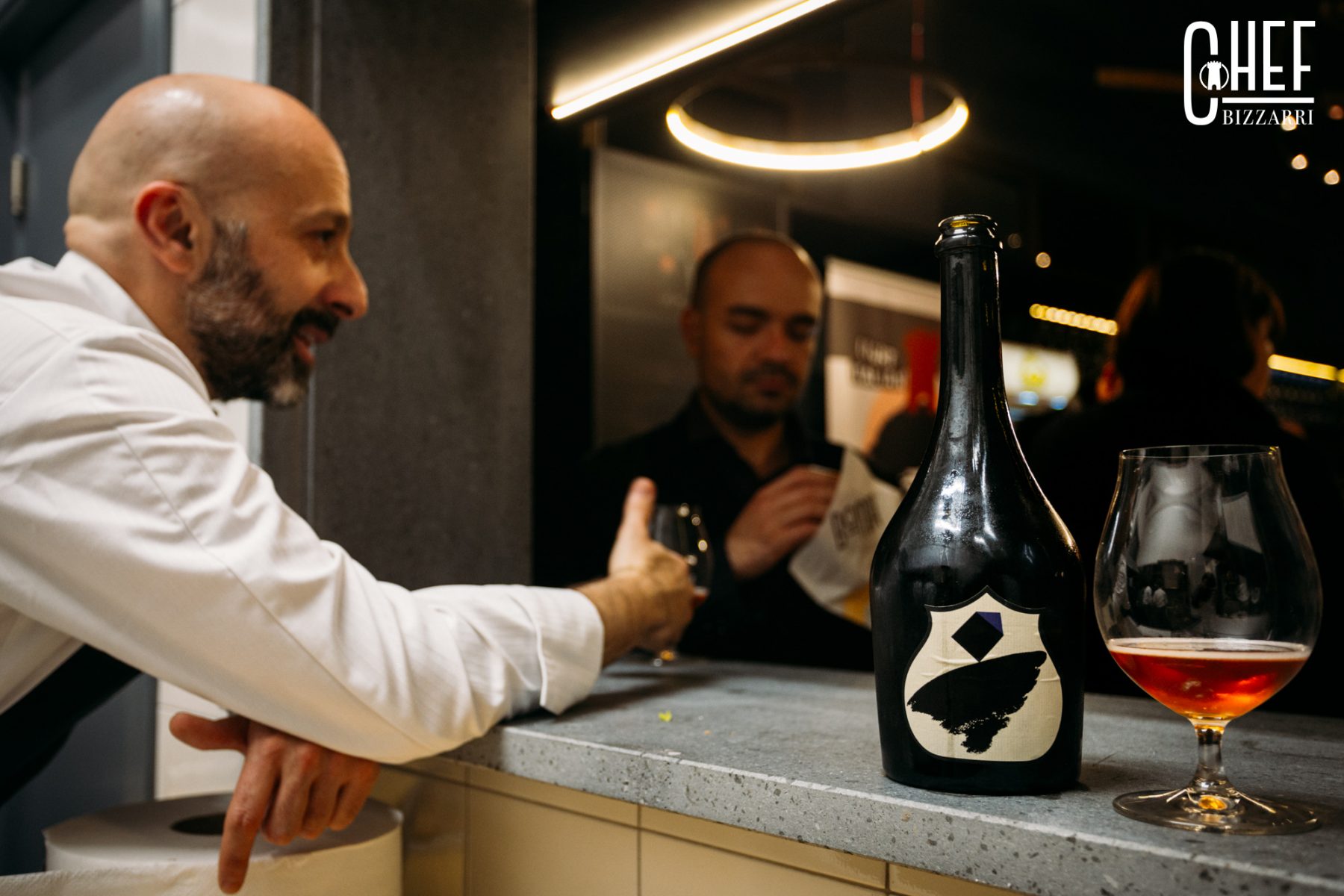 “Chef Bizzarri” is back and is now hitting Europe. Rome, Paris, London, Brussels and Milan are the stages scheduled from November 2017 to January 2018. Last year, Birra del Borgo started rethinking the combination between beer and gourmet cuisine, and followed this idea by planning a series of events in Italy, involving chefs and restaurateurs willing to take up the challenge. The results of this experiment were unconventional events where exchange of ideas, stories and food found a perfect match with beers, the best ones. This year’s edition will be even bigger, as “Chef Bizzarri” is going to conquer Europe in search of “imperfect” matches, with the challenge to be even more original than last year’s edition but still with the same goal: to share the idea that beer can perfectly bond with the gourmet cuisine, giving it a new and innovative perspective. Our ambitious mission is to bring (Italian) beer to places that we have never reached and that are willing to give us a chance and value it. Promoting an open debate on such topical subject needs to rely on the right ambassadors, reason why Birra del Borgo worked hard on selecting attentive restaurants and chefs, passionate but, most of all, ready to rethink the role of beer in the kitchen.

ROME
In Italy, the traditional food industry has been changing constantly in the last years. The result is a huge variety of restaurants, from historical ones, to our typical taverns, to fine dining cuisine. In this context, the opening event of Chef Bizzarri will be on Thursday, November 23 at “L’Osteria di Birra del Borgo” in Via Silla, and will be featuring chef Salvatore Tassa, from Colline Ciociare restaurant, and Gabriele Bonci, our kitchen director. This is the occasion to live the experience of the one and only Osteria, based on the quality of the reception, on the dining room as a place of socialization, and on a traditional and family cuisine. In addition, new contents make it a modern Osteria, a place suitable for everybody, where the central role of the combination beer-cuisine is strongly reaffirmed. Beer mingles with the kitchen, drinking and eating, sitting on a table or at the counter, become for visitors a way of sharing stories.

MILANO
The closing event will take place in Milan, on Wednesday January 24, at the trattoria “Trippa”, with Pietro Caroli (patron) and Diego Rossi (chef). Quintessence of the typical trattoria, Trippa represents a new way of keeping up with the tradition without reinventing itself, simply sticking to tradition and quality. Diego is from Verona, where he attended a hotel school and then had the possibility to train in important Italian restaurants. Pietro studied economics, he comes from Puglia and quit his job in a corporation to devote himself to his biggest passion, the kitchen. Different paths and personalities, but a single passion which led them to the beginning of this adventure in 2013. Their motto is “Letting people eat good food in a comfortable environment”.

In between Rome and Milan’s stages we will stop by in Paris, London and Brussels.

PARIS
On Saturday, November 25 Birra del Borgo’s Bizarres will be hosted by Fulgurances, in Paris. Here, Sophie Cornibert and Hugo Hivernat created L’Adresse, a vessel of stories and gastronomic experiences. Born as a blog in 2010, in the last three years it has turned into a magazine that explains contemporary cuisine with freshness, freedom and a touch of avant-garde graphics. Fulgurances is the kind of place where the idea of cuisine is fickle, subject to continuous changes (the staff in the kitchen and in the dining room are permanent, while the chefs change every 6 months), but where you can still clearly perceive its identity. This place sets out new, unpredictable and free patterns; it collects experiences, trips, events and ideas from different chefs. The temporary chef until December will be Sebastian Myers. He is a young Australian cook who, thanks to his journeys all around the world, puts his heart, bravery and a touch of foolishness in its dishes. He has the typical attitude of who isn’t afraid to expose his feelings while cooking, and is always ready to try risky matches, that are always perfect.

LONDON
On Wednesday, November 29 our project will hit London, hosted by CUB, in Hoxton Street. CUB attracts customers by satisfying their bellies and minds with a kitchen proposal, firmly in line with “Chef Bizzarri”. Bartender Ryan Chetiyawardana, known as Mr Lyan, has opened White Lyan at the end of 2013, creating one of the most innovative cocktail menus in the world. Chef Doug Master has founded in Brighton, in 2014, Silo, the first British “zero waste” restaurant. CUB is a small place, fancy and modern. It is a perfect summary of a “sustainable” culinary experience made thanks to a wise match of ingredients and people.

BRUSSELS
On Wednesday, January 10, before the closing event in Milan, Birra del Borgo will bring its project to Brussels, hosted by Humphrey restaurant. The owner, Glen Ramaekers, has a career as a wine and liqueur importer and has opened this restaurant in 2015 in the heart of Brussels, in an emblematic building hosting also PIAS, one of the biggest Belgian music companies. Belgian chef Yannick Van Aeken brought into Humphrey’s kitchen his experience as sous chef at the famous restaurant Noma in Copenhagen and reinvented it: he now proposes dishes inspired by Filipino cuisine and prepared with ingredients selected by the chef. The drink list is inspired by Europe but is studied to match the Filipino cuisine with biological wines and beers.